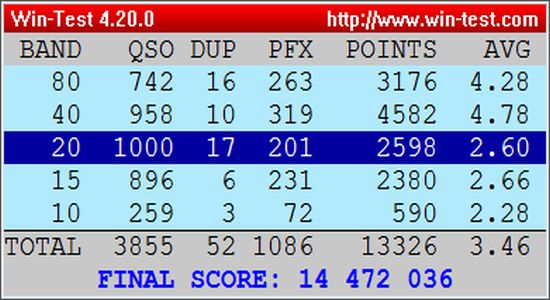 What a race on live score www.cqcontest.net!

DR5N got off a very good start leading the game for the first few hours with a small gap. Around 1000z we were able to take a small lead around 100k points for the first time till all of a sudden at 14:36z … BANG! Power outage!

We were down for almost three hours till we found and corrected the failure! The RCCB detected a failure current in one of the containers outside the radio room and shut down the whole station. After we were back up and running we trailed by 700k points and no matter what we tried we were not able to close the gap ….. until ….. two hours before the end of the contest.

We bypassed DR5N with a fantastic last minute lowband run and ended up with a total score of 13.8 mio and a tiny lead of 300k points. This is just 2% of the score and we hope it holds up on the log checking process! Thanks to DR5N for that thriller competition, the team for keep ponding, Philippe LX2A for his great station and
all the callers!