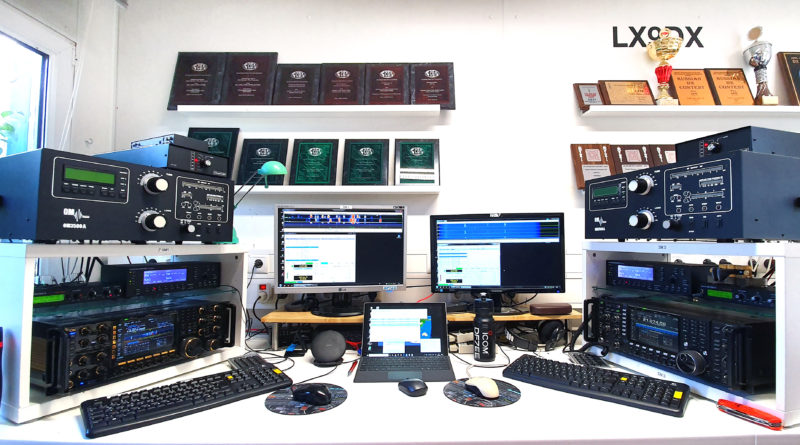 With all the hype on the FT8 and FT4 modes Slovenia Contest Club and WWROF created the new World Wide Digi contest that fits perfectly into the CQ WW Contest schedule.

The only way to find this out is to participate!

I decided to go LX7I again and try a SO2RUN effort from Phillips super station in Eschdorf. With my ICOM IC-7850 and the IC-7700 on site it would be a very nice setup with lots of antennas to play with!

I wanted the setup to be KISS (keep it simple stupid). I downloaded the latest WSJT-X software and used N1MM logger only to collect the QSOs from both radios into one log. Dupecheck was done on each instance of WSJT-X seperatly. The only propblem with that setup was – I had to decide before what band on what radio to be used. The other PC would not know the dupesheet.

Because FT4 and FT8 modes use timeslots it is very easy to run on both radios. Just have one set to even and the other to odd. You can NOT mix FT4 and FT8 because of that sequencing. You need to go same mode on both radios. That turned out to be a little culprit. I hoped to run FT4 mostly because of its double speed and therefore much better rates. When the contest started 20m was full of FT4 station but I could not find many QSOs in FT4 on the second radio.  10m and 15m were dead and to early for 40m. The band portion for 80m FT4 at night was unusable to strange noise so 80m was FT8 only. So the best rates were done with FT4 on one radio only while the other radio called CQ on dead bands.

Usually if you run FT8 from CT3, D4 or LX your RX window turns red immediately because of so manny callers! Normal “FT8ties” just want to work a “more exotic” callsign. Not so much in the contest segment calling CQ TEST.  Sometimes you needed to call several time for one QSO – bad for the rate and my goal to get more than 1000 QSOs. I figured out that maybe only 20% were really in the contest while maybe 80% doing their usual FT8 stuff. So I decided to go into the normal FT8 segment and try to run there. The RX turned red in seconds and I could create more stable and longer runs with both radios at the same time in FT8. Speed wise 2x FT8 = 1x FT4 but but the runs were deeper and longer lasting. So I guess it was the right choice mixing things up a bit! 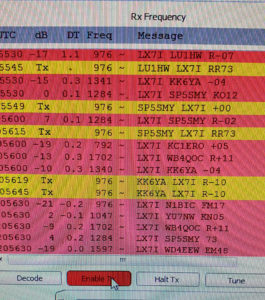 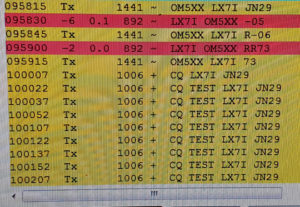 You see what I mean? Left “normal” FT8 and right side contest mode.

To stay alive the full 24h you need to be a monster! KUDOS to all the guys who are able to play SSB or even CW for 48h …. you guys are CRAZY!!!

#icomeveywhere (Thank to Ray Novak for the nice shirt from Dayton)

It is also a very nice feeling when you get calls from your friends supporting your efforts or when a VIP person all of a sudden calls you! 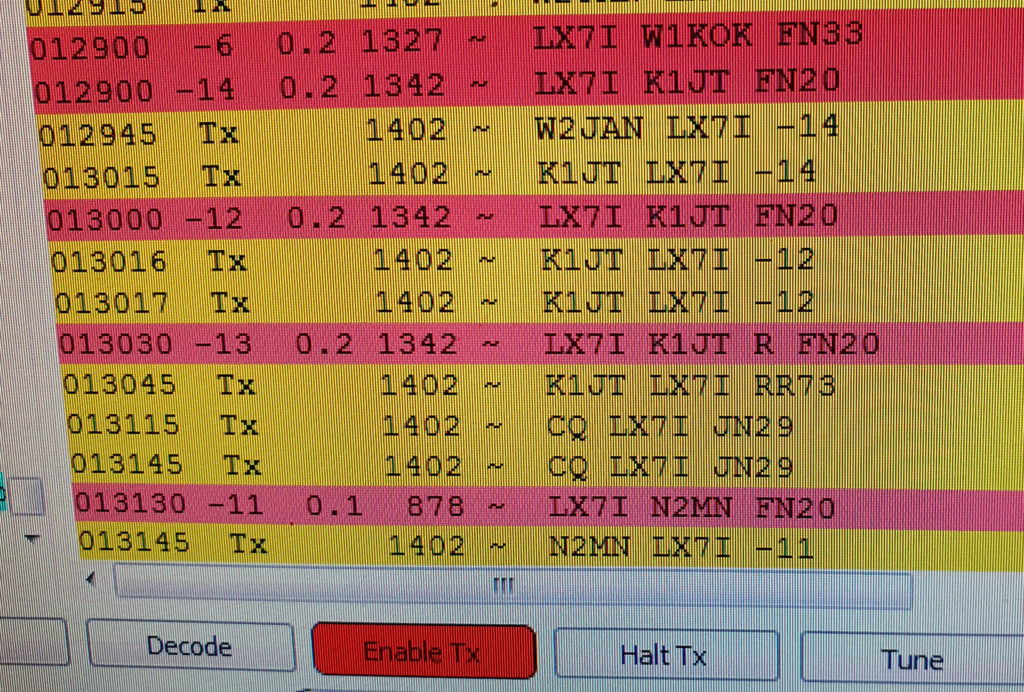 Another cool feature for this mode is that you can always see where your signal is going!

Over all it was a lot of fun and I reached my personal goal of well over 1000 QSOs! 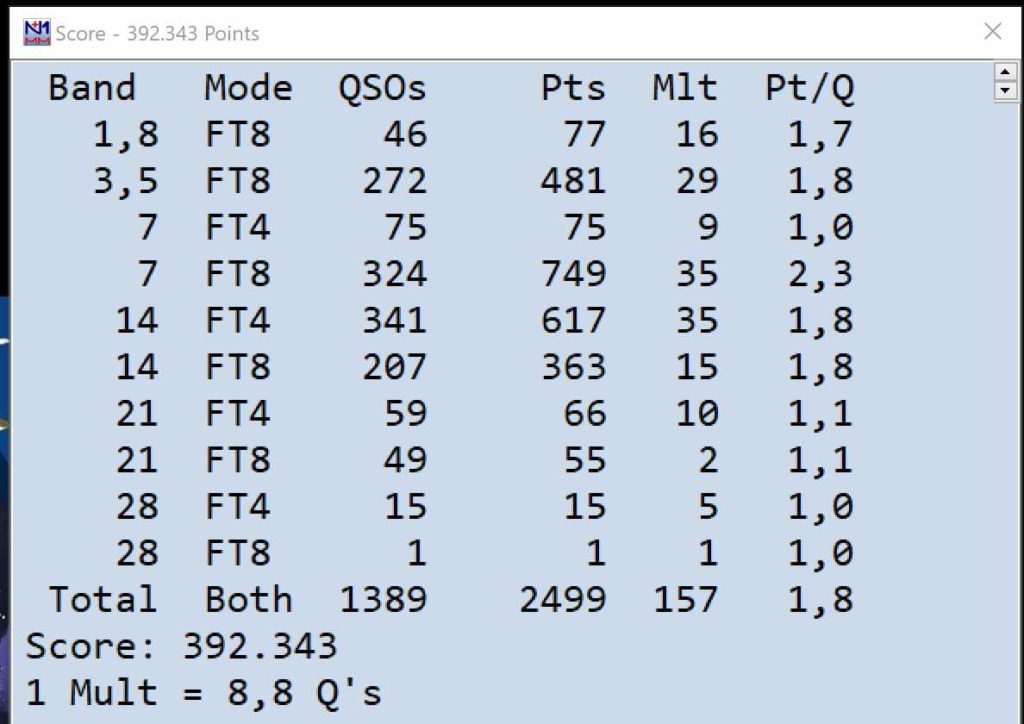 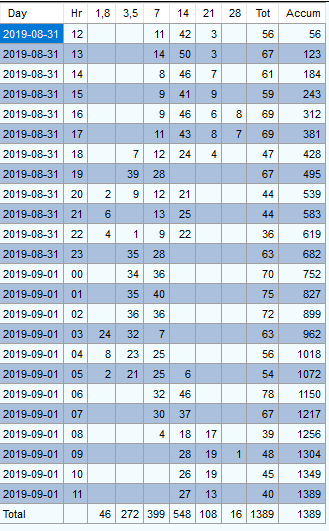 After log deadline LX7I as a decent gap to #P2 – this should hold up easily on log check! 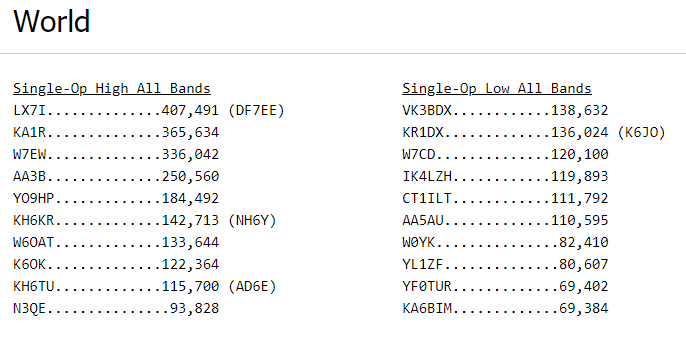 Thanks to all the callers and sorry if WSJT-X did not pick you up that time … try again WW DIGI 2020!

Next stop is CQ WW RTTY from LX7I – hope to see many of you on my screen!