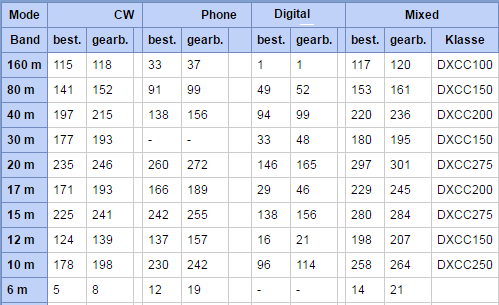 It would be nice to have the 2000 medal on my DXCC Challenge plaque, but this is not as easy as it seems!

Technically I am almost there! I have worked 2034 band slots, but I have only 1946 confirmed so far. Yes, some QSL chasing can be the key to find the 54 missing ones, but that still means all the search work for the older band slots confirmed by paper QSL cards. I have boxes with more than 23.000 QSL cards in it and they are kind of organized, but far from perfect. That will be a lot of digging in dusty boxes …

What is the alternative?

I worked some 900 band slots last year and 2016 QSOs are mor likley to appear on LotW than 1996 QSOs, so the idea is: Work missing band slots! That does not mean “missing” in case of never worked before, it means maybe it is already confirmed but NOT by LotW! That could be a DX-Pedition that is easy to catch and has potential to stack LotW confirmations.

The perfect example is A2 – Botswana. Not a new one for me. It was confirmed before on 10m and 20m. Only 10m was confirmed @ LotW so plenty of room for improvement!

I worked them on 6 more band (plus 7 LotW slots) within two days. 🙂

Here is the example Japan:

So the goal for 2017 is to find and work 200 more band slots that are currently NOT confirmed by LotW!