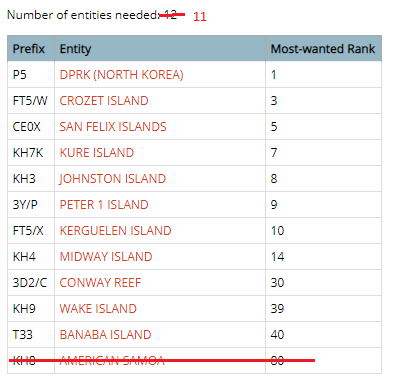 Since some moth I have this dates in my scedule to look after KH8/OZ1RH and KH8/OZ0J for a all time new one!

Even that KH8 is only on place 80 of the clublog most wanted I never had a chance to work that DXCC befre. The last “dx-pedition” there wer just a few guys working some US with a simple vertical at very odd times, so I was really looking forward to this one!!!!

The pileups were great and the condions were poor – more than poor!

I first managed to work KH8/OZ0J on 30m CW and on the last day I was able to work KH8/OZ1RH in FT8 only, but better than nothing!

Thanks for the ATNO guys …. I bet it was difficoult over there … It was crazy here in Europe!